Dinono (ディノノ) is a fan-character in the series Keroro Gunso . It is a Master Sergeant (曹長 Sōchō) from Planet Keron, and leader of the R.E.J.E.C.T. (Recon Elective Journey Elite Circumnavigation Team), another name victim of unfortunate acronyms, that is in temporary suspension.  It's also a talented biochemist.

Dinono is the eccentric, yet laid back product of it's own genius and error.  Previously known as Uchuchu, the intelligent and highly reserved leader of an outstanding team of Keronians, due to an experiment gone horribly wrong (or right) it became the hybrid known as Dinono.  As Dinono, it's laid back, gluttonous, and suspended from the Keron Army until they decide what to do with it.

It's easy-going and hard to anger, though when it get's hungry it has a penchant for chewing on things--namely it's fellow soldiers or friends.  When famished, it tends to forget the difference between food and friend.

It is known to be a little insane, despite that it's usually friendly.  It absolutely despises Pekoponions, humans stear clear.

Adopted to a small family, Uchuchu's father was a traveling businessman and her mother a talented cook.   She grew up in a fairly normal life, though was introverted and independant.  Her father would come home with fascinating stories and interesting nick-nacks he'd picked up on his travels.

He spent a short time on the planet known as Pekopon where he came upon a trade with an alien who claimed to be an expert on the planet.  What he was given was a series of fossils and some books on the large species family known as Dinosaurs.  He brought these home and Uchuchu became immediately fascinated by the reptilian creatures that once ruled the blue planet.

As she grew older, her interest waned temporarily as she grew interested in her own species science, she studied chemistry and computer technology, and dug deeper with biogenetics.  During college, she joined the Keron Army to help pay for her schooling, and they found her technical knowledge incredibly useful and got her out of the books long enough to train her to be a full fledged soldier.

As time passed she moved up the ranks signifcantly and had the opportunity to build her own team.  By the time she was a Master Sergeant she had a hardy little group of misfits that each had specific skillsets that made them a good team.

The army placed her team into an operation of Recon teams, and they were elected for a series of missions doing research on planets that had been labeled for invasion all over the universe.  This was an honorable mission and one that few ever got to see as they had years to devote to researching different planets and discovering knowledge that the army had yet to acquire.

As one could probably guess, their mission took them to Pekopon, it was a side mission that was herald to them during their journey as the army was concerned for the lack of results from the A.R.M.P.I.T. Platoon.

Once arriving on Pekopon (Earth) the research incidentally lead Uchuchu to rediscover her love for the Dinosaurs she had so loved as a child and after seeing one too many movies, she concepted a biogenetic experiment to try and grow one. She'd seen it in a movie, the DNA of frogs could help cultivate the missing pieces, and as an intelligence herself, she figured her own DNA would prove as a more stable choice rather than Pekoponian frogs.  However, the experiment backfired, reversing the process and sending the DNA bits into her.  Through an excruciatingly painful rewriting of DNA and meshing of species, Dinono was born.

With the meshing of DNA and the lack of any species like her, the frog-genes did attempt to rewrite her gender and her mentality several times.  She became an it, a hermaphrodite without the ability to reproduce sexually ever again.  Essentially, a new species was born, which Dinono adoringly named Dinokeronian.

It wasn't unhappy with the changes and decided it was quite suited for the new look.  However, the Keron Army got wind of the news and was forced to suspend their team from further action until they figured out what to do.  Despite being loyal to the Keronians still, Dinono being a mesh of countless strands of DNA posed the possible threat of insanity and it doesn't help that it tries to eat others occasionally.

They remain on Earth right now on what Dinono calls an "extended vacation."

As Uchuchu, she was a milky brown Keronian, had a heavily freckled face, with a small beauty mark on the right side, and almond shaped blue eyes, the fin on her tail had split in two when she was younger.  Her hat was white, with small dog-like ears on it, and a little green long-necked dinosaur as the symbol. She wore glasses (cracked ones she refused to get fixed) and headphones, she was known to have an odd fashion sense.

After the accident, it became completely green, the "ears" in it's hat had to be modified for the horns it grew on it's head.  It still retained it's abundance of freckles, and it's now yellow eyes grew more angular and the pupils turned to slits.  It still retains it's headphones and it's useless almost completely broken glasses (for it's one eye that still needs them).  It's mouth hosts rows of razor sharp pearly whites now, and its hands and feat are clawed (feet appear to be raptor inspired).  It's tail is long and prehensile.  It's got a rather large scar across it's belly, and several on it's face.  And it's now got long fluffy yellow feathers (in the winter it's covered in a bit of down).

It's actually now a little bit larger than a regular Keronian.

Seems Healthy and very powerful, though glutoneous and after eating it can be lazy.  It's senses are much sharper and it tends to be more animalistic than it's fellow Keronians.

Dinono's strengths rely on it's animal instinct and newfound predatory nature.  It's smart, fast and cunning, and fiercely loyal so definitely a good ally.  Luckily, it's really hard to piss off and make an enemy out of, and it has the good will to warn people of it's hunger.  It has quite a bit of patience except when it's nearing the famished stages of it's hunger, when it's starving it wont even register that it knows you at all.

As for weaknesses, it has terrible eyesight in it's right eye and mediocre in it's left, it has to rely mostly on it's other senses to get around.  The injury in it's stomach is prone to giving it stomach aches when it eats, and like a snake, when it eats (especially a large meal) it tends to become sluggish and lazy for hours to days depending on how much it ate.  It's only carnivorous now so eating anything green makes it ill.  When it's molting too, it grows less focused and more irritable as the itchy feathers and need to remove loose ones makes it completely self-focused.

It's hatred for humans can be a weakness at times as it often prefers to attack them or avoid them completely.  Why it hates humans is not known.

It has a debiliating fear of grizzly bears.

Note: All relationships with canon-characters are based on RP interaction, please don't take this as anything but fan-created nonsense, and I am only explaining the ones Dinono has actually met

Keroro: Interacts with him minimally except to occasionally challenge him to video games and share recipies.  Their mutual appreciation of food and goofing off makes them friends, but they aren't exceptionally close.

Giroro: They don't interact...mainly because Dinono once attempted attacking Natsumi for waking it up from a nap and startling it.  While Giroro commends Dinono's exhasperation and desire for Keronians to rule the planet (instead of Pekoponians), he didn't take kindly to it's attack nor it's absolute lack of regret for doing so.

Tamama: Snacking buddy? Definitely, but they honestly don't see each other that often.

Kululu/Kururu: It has kind of a "I idolize your creepiness" crush on him, though it isn't a romantic thing.  It prefers to just hover over him and enjoys making him uncomfortable.  Truth is, Dinono just appreciates other genius minds.  Kululu would get along with It probably if It didn't bother him so much.  However, he see's it kind of like a less annoying and more unnerving pest as he see's Tororo.

Dororo: Who? Actually, they don't see eye to eye at all, Dinono hates humans and Dororo want's to protect them.  They have a mutual respect for avoiding one another.

Natsumi: Mutual utter hatred, it doesn't help that Natsumi already detests the frogs, now there is one that's faster, creepier and has attempted to gut her before.  While Natsumi can definitely hold her own, the experience was not pleasant and if Giroro and Fuyuki had not interviened they probably would have fought till one dropped dead.

Fuyuki: Dinono respects him and stays away from him for the soul fact that he's fascinated by the frogs, and of course Dinono is an oddity and Fuyuki loves oddities.  While it still detests him and his species, it avoids him out of courteousy.

Jirara: Met by chance when Jirara was on Pekopon to train, Dinono instantly accepted him as a friend when he gave it food.  Through time he grew feelings for the Dinokeronian, which it reciprocated but could not fully comply to.  Dinono is not the settling down type and with it's hormones, sticking to one person makes it very difficult (not to mention it was stuck between two who fancied it). They currently remain close friends.

Shivava: The two started off bickering, as he teased Dinono quite a bit after it had been forced into a dress. Due to a Magic!Anon the two were suddenly madly in love.  Though for Dinono that constitutes absolute awkward, thumb twiddling, sheepishness.  Of course, things got even crazier when Shivava inquired about Dinono having children, since it cannot anymore, he stole one of it's feathers and created essentially a "test-tube" baby that was implanted into an egg.  He gave it to Dinono who watched over it and soon it hatched with what was their genetically created child.  Eventually he proposed, Dinono agreed but they are kind of slackers and their relationship is all over the place so who knows when/if it will happen. 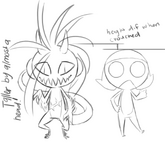 Current appearance (without hat)
Add a photo to this gallery

Retrieved from "https://keroro-gunso-orikero.fandom.com/wiki/Dinono?oldid=8884"
Community content is available under CC-BY-SA unless otherwise noted.