Start a Wiki
Pamaru (パマル) is an female fan-character of the Keroro Gunso series. She is an 8-year old Half-Keronian and Half-Axolotlian girl who is a playful, helpful, energetic, sometimes childish and naughty, and full of life itself.

As stated, Pamaru is an 8-year old Half-Keronian and Half-Axolotlian girl who is a playful, helpful, energetic, sometimes childish and naughty, and full of life itself. She is an orphan and doesn't have any sibilings. She is an emotional girl who smiles/crying/or being shy a lot, and cheers peoples up even when in worst situtations.

She loves snacks, especially space roll cakes (like Pururu) and star fruits (like Keroro), and sweet buns. She likes getting her uncle Kululu and her best boyfriend Kiruru attention, and she likes to sports and doing exercises, and she is an hardworking, good at doing chores. She can be a bit of a prankster at times but she knows how to behave. She likes adventures and wandering anywhere, even places without anyone knows. She can be stubborn a few times.

Also, she is an smart girl and likes studying, and also wants to be a great nurse someday once she grows up. She also likes helping peoples around.

She hates banana/banana peels, because she would slip on it. She's also hates the sound of styrofoam rubbing together, and cold; and fear of criminals, evil peoples, seeing her friends and family getting hurt or killed off, and the demise of her loved ones, earthquakes and tsunami, and even getting inflected with COVID-19. She hates fighting and violences.

Also, she is an vegetarian (she rarely eats meat, fast foods), so her appetite is less. She hates drinking cokes and sodas.

She's inflected with the Foreign Accent Syndrome (She didn't speak in Korean accent permanently) when she was age 5. Her most favorite foreign accent is Russian and Indian accent.

Pamaru bears her purple skin color, like Garuru, and her wears a special hat that contains a moon emblem. When her special hat is not weared, or when doing something like bathing and sleeping, she wears a purple hat with a flower, like Pururu. Her eyes is different colored when she was born, with her left eye being yellow-orange, while her right eye being blue, or purple.

When being fat, Pamaru's face were chubbier, and her belly is bigger. Her butt were bigger and her tail were also bigger a bit. If she wearing her special hat while being fat, she will being embrassed. It is unknown if her chubbier face would fit her stubbornness more.

When she grows up as an adult, her appearance is mostly not changed, with the exception her wears purple colored hat with cat ears like Pururu when she not wearing special hat, or bathing and sleeping, etc.

One note to say from me, an triple-minded person, who also an Keroro Gunso fan, who created this page, despite her moon emblem, she isn't an Salior Moon fan.

She is an healthy girl, despite she being secretly pudgy. Her blood type is AB.

She was born in an Keron star in the future, at the 24 of December, but 2 minutes eariler born before her younger sister Pamira. While the future was dark, Pamaru was able to grow in a healthy childhood, and also developed a habit: being shy easier. At the age of 6, her parents was passed out and she cried for a very long time, and having her longest and last period of depression in her life. She also adopted Airara and her sister Airiri as her adoptive sisters. After 1 year, she finally calm down herself and uses her time machine and go back to the past but on "an alternative dimission." She was fainted while her time machine landed on the Earth, Kululu found her on a place and take her home. After she waking up from an nightmare while fainting, she awaken her ability of knowing everything in the past, and even reading everyone's minds. Pamaru was thin and weak at this time, and thus she ate more dinner than anyone else with her temporal big appetite, causing her to gain more pounds, thus she gets pudgy and almost chubby. She found Kululu is a good guy, so her liked him and likes to call him "uncle" or "uncle senpai."

It was a nice spring day, Pamaru had gotten permission to go explore the city as long as she was invisible. Her with rules was a so-so attempt but she did turn invisible for most of her trip. She was amazed of how many people lived in such a big city, she saw the schools, the shops, and the parks. She loved the city and loved the books shops with all the manga inside, and she read all the ones the kids were reading. She knows her ratings. As she continued to explore the city she got hungry and stopped by a bread cart, and paid it with her allowance that her uncle Kululu gave her. Luckily she was invisible so the man didn't see her when she put some bread in a bag and left the money on the cart. She found a nice quiet place to eat next to a bridge at the bottom near the water. She was enjoying the nice quiet time and luckily she saw no humans around until she heard some foot steps, she thought it was a human until she looked to her right. It was another alien, it was a Kiruru. She had heard stories about them but there was something off about this one. He was a small form of his large self, could he had been stuck in that form? She also saw that he was hurt, what happened to him? Pamaru thought that he might have been hungry so she past him one, he held it and sniffed it. "It's okay it's really good. Believe me I eat the human food all the time." Pamaru said as she smiled kindly, Kiruru sat next to her and started eating the bread. Pamaru saw something different in Kiruru than from what her uncle's have told her, he didn't look evil at all. She saw that they could be good friends even Kiruru wasn't much of a talker he seemed to enjoy the company. So, she adopted Kiruru and become her best boyfriend ever.

Because Pamaru saved Airara and her younger sister Airiri's life, these both sisters liked her so much, and helping her aways. Nowadays, Airiri also adopted her personality.

If someone bullied Airara or Airiri, Pamaru will stands up for them, but there's an chance of getting injured.

Kululu found Pamaru on an alternative universe of Earth, and adopted her. Thus, Pamaru likes to call Kululu "uncle" or "senpai". Pamaru likes to uses Kululu's inventions with his permission, but she knows how to uses properly. She likes to sleep with Kululu. Kululu sometimes would likes play pranks on her.

See above. After that, Pamaru and Kiruru are best friends ever. Pamaru is more concered about her boyfriend, and likes to sleep with him.

Pamaru's middle school friend. Not much known about her but Fuwawa often taken Pamaru outside and going to eat things, buy things, and etc. until the evening or night. To make things worse: one day Fuwawa fattened herself and Pamaru up. However, Kiruru still loved her and kissed her chubby cheeks. Then the both girls was eventually diet.

If you want know about Fuwawa, go here.

Because of Pamaru protected her as a baby, Pamira liked her so much. After deprature to earth, the both sisters missed each other so much and until the COVID-19 Pandemic, where Pamira adopted Pamaru to her small flower shop. Pamaru also liked how she opened her flower shop and praised her.

Pamaru first meet him at first time when Pamira adopted her. Pamaru thought Pikoko was a very kind, innocent, and cute boy. She often helps him so much. Pikoko can't help but blush.

Differences between the main timeline and the Future Trunks timeline Edit

The same name of the Pamara's daughter who's greatly resembles Pamaru and it's 8 years old. While her personality is mostly same as Pamaru, she is an calm girl who rarely cries like Kiruru, as opposite to being just an crybaby at the time.

Pamaru were grown into an wise adult in the future, and being the great nurse. She married Kiruru and have 2 daughter twins.

When Pamaru and Main Timeline Pamara's pregnant, they started to got lazier and lazier as they bellies got bigger and rounder (and their cheeks are even seems chubbier a bit, somehow strange), causing their husbands to do all of the chores for them, and the both were got resting at home. After the twin daughters is born, Pamaru and Main Timeline Pamara is now no longer being lazier (but still a bit lazy) and restored their jobs later.

Pimimi is the daughter of Pamaru and Kiruru who is an 8-years old Kiruru form Keronian girl. Like her mother, Pimimi really energetic, always want to know but really strict; and she's playful, helpful, and full of life itself, like her mother.

At born she have an very super adorable voice, so she can have very super cute and adorable singing talent. She wanted to being a singer when she grows up, and her parents would support her dream.

She's hardworking, good at doing chores, sometimes childish and naughty (and can be a prankster at times (like giving a person a pink X on their body) but she know how to behave), but she's a really good leader of her band, she seems to be stubborn at times.

She loves snacks, but she can control herself to prevent herself being fat, despite she can appears having a slighty big belly until her friends started noticing her being fat and Pimimi would exercising(yeah, she likes sports and exersices like her mother) until she finally slim enough. Also she loves singing in many languages (with the mostly excluding of Korean), and she also loves childrens. Her favorite season is Summer.

She hates criminals and Korean peoples, because she things they're nightmarish evil monsters could haunt her dreams at night. She also hates being fat (because that will ruin her), and the sound of styrofoam rubbing together, and she also hates cold.

She also have one twin sister, Pamari, who has also same age as her, but born later 2 minutes after the born of Pimimi.

Like her mother, she likes Kululu and likes to call him great-uncle, despite her younger sister Pamari are afraid of him. Pimimi likes Kululu's inventions, and plays with it along her twin sister.

She owns a time machine, which she used to travel to the time where her mother where still an 8-years old, and having fun on that time temporarily, along with her twin sister.

In future, Pimimi is an famous wise singer and lead of her band. Unlike Pamaru, she isn't married yet because she have many fanboys.

Pamari is the daughter of Pamaru and Kiruru who is also an 8-years old Kiruru form Keronian girl. Unlike Pimimi, she didn't afraid of being fat, but she would exersice to get back in shape if needed.

Unlike Pimimi, she loves cold. But, Pamari afraid of Kululu, but she would try to overcome her fear.

She is an otaku who loves manga and anime, and also a average singer too. She wishes that she will become a great nurse and even a part-time singer when she grow up (cuz she really bad at healing, but she didn't give up) 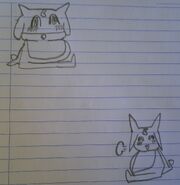 Adult Pamaru and Main Timeline Pamara being pregnant before their daughters is born. 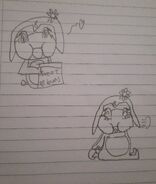 Retrieved from "https://keroro-gunso-orikero.fandom.com/wiki/Pamaru?oldid=9549"
Community content is available under CC-BY-SA unless otherwise noted.