Takeshi is the Deck Cadet and only human crew member aboard the space pirate ship the Cassiopeia. He attends middle school in Inner Tokyo.

Takeshi is a socially awkward eighth grader who has a fascination with the law. He dreams of becoming a defense attourney and carries a little book filled with legal information. He has a habit of blurting random bits of useless information, which serves as both a social handicap and a source of endless entertainment for the crew. While he often fails to focus in class, his observational skills are top-notch. He also has a talent for translating ancient space runes. His good friend and partner, Hakeke, never fails to exploit Takeshi's talents, but they are nevertheless a Prime Example of Good Old Fashioned Broship.

Captain Hakeke: Hakeke is Takeshi's best non-human friend. They met when Hakeke was shipwrecked on Pekopon and separated from his crew. After a while, the became fast friends, and Takeshi agreed to help Hakeke find Chief Engineer Hororo so that the Cassiopeia could be repaired. Takeshi also became Deck Cadet aboard the pirate ship on the condition that he could return home to Tokyo whenever he wished.

First Mate Anana: Takeshi looks up to Anana for her determination and fighting spirit. He usually ends up on watch with her, which is his duty as a trainee officer.

Chief Engineer Hororo: Takeshi is a little afraid of Hororo due to his shady nature and creepy appearance, but who isn't?

Chief Steward Lilolo: A friendly acquaintance of Takeshi's. She assists Anana in training him in first aid, ship maintenence, navigation and other important things.

Second Mate Shikiki: Shikiki is a kind and supportive member of the crew, who taught Takeshi most of the medicinal knowledge he has.

Boatswain Relala: Takeshi is a little frightened of Relala due to her tendency to shout rather than speak. He is one of the few people who knows about Relala's habit of stalking Hakeke.

Ordinary Seamen Jisusu and Jusisi: Takeshi respects them as senior members of the crew, although he is technically ranked higher than them.

Kotone Ito: Knows her from school,but not very well. Has a slight crush on her. 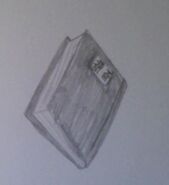 Takeshi's law book
Add a photo to this gallery

Character created by doctorCatastrophic. If you would like to RP with Takeshi, please do so on my talk page. :)

Retrieved from "https://keroro-gunso-orikero.fandom.com/wiki/Takeshi_Saito?oldid=8571"
Community content is available under CC-BY-SA unless otherwise noted.